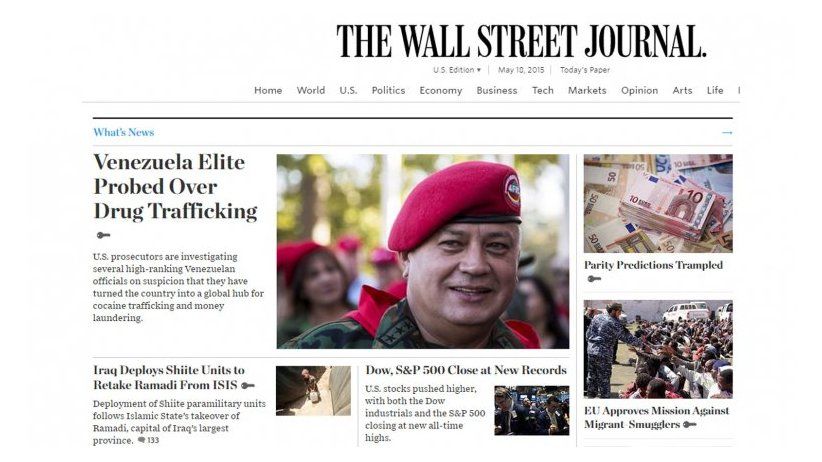 The U.S. Court of Appeals for the Second Circuit called the libel theory offered up by Diosdado Cabello, formerly the second-most powerful politician in Venezuela, "patently unbelievable."

Downloads
0
0
Tweet
$.-
Second Circuit Affirms Dismissal of Libel Suit by Top Venezuelan Politician Over WSJ Report
A 2015 article by The Wall Street Journal said Diosdado Cabello, described as the second-most powerful man in Venezuela, was being investigated by U.S. officials for turning the country into a global hub for cocaine trafficking and money laundering.
By Colby Hamilton | April 25, 2018 at 01:04 PM
"[P]atently unbelievable"—that's what the U.S. Court of Appeals for the Second Circuit called the libel theory offered up by Diosdado Cabello, formerly the second-most powerful politician in Venezuela and one of the heads of the late President Hugo Chavez's political party, who claimed there was simply no way a U.S. government official could have leaked information about a Department of Justice drug investigation into Cabello.
According to the 2015 article, titled "Venezuelan Officials Suspected of Turning Country into Global Cocaine Hub," cited more than a dozen unnamed sources who said an elite unit at the U.S. Drug Enforcement Administration was building a case against Cabello and others in the Venezuelan government. Cabello was called a leading target in the investigation.
In 2016, Cabello sued The Wall Street Journal's parent company for libel in the U.S. District Court for the Southern District of New York. U.S. District Judge Katherine Forrest dismissed the suit, after allowing an amended complaint to be filed, after Cabello failed to show how statements at issue were false, and failed to adequately plead actual malice.
The panel, composed of Circuit Judges Ralph Winter, Rosemary Pooler and Debra Ann Livingston, said in an opinion that regardless of the falsity issue, the requirement of actual malice failed on its face. Cabello claimed the WSJ's unnamed sources must have been fictitious, and, if the claims weren't made-up, then the sources were not properly vetted. Cabello's theory stated that, while "historic landmark journalism" has clearly benefited from information leaked by anonymous government sources, Cabello's case presented "nothing inherently controversial," and so any leaking about an investigation "can serve no noble cause," and should have caused WSJ to "question the reliability of its sources (to the extent such sources actually exist)."
As the panel noted, using anonymous sources does not alone support actual malice, requiring other allegations to support the claim—which the panel noted Cabello failed to do.
"His general theory—that any investigation into his activities simply could not have been leaked by government authorities—is patently unbelievable," the panel wrote "Indeed, even on his own theory of landmark journalism, leaking on an investigation into Cabello-Rondon would be possible, or even probable."
Cabello's stature at the time—head of Venezuela's national assembly—made anything involving him naturally controversial, which would give sources incentive to potentially leak.
"Accordingly, the allegations that leaking on this topic simply could not have happened is illogical even by the standard that Cabello-Rondon himself proposes in his complaint," the panel stated.
In a statement, a spokesman for Dow Jones said the company was gratified by the court's decision to reject Cabello's claims.
Davis Wright Tremaine partner Katherine Bolger represented the Journal's parent company, Dow Jones, on the appeal.
Cabello's legal team was led by Diaz Reus partner Xingjian Zhao. He did not respond to a request for comment.
Colby Hamilton - B. Colby Hamilton is a litigation reporter for the New York Law Journal and Law.com.