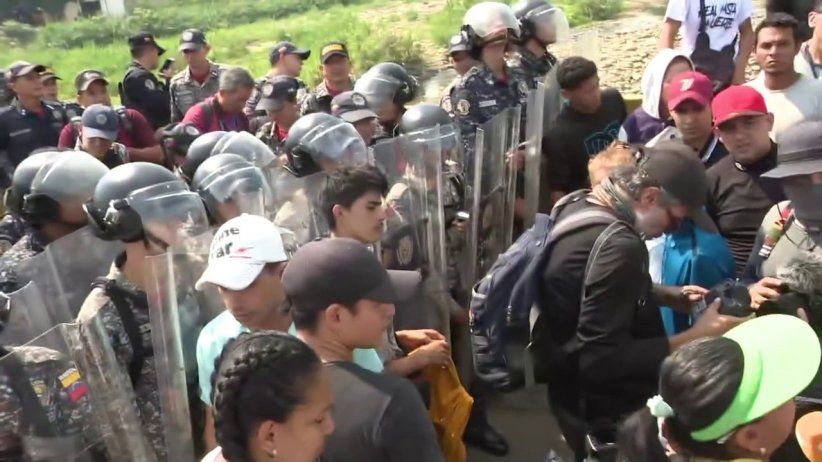 Attacks on journalists, restrictions to their work, acts of censorship of contents and Internet blockages.

MIAMI, Florida (February 25, 2019)—The Inter American Press Association (IAPA) today condemned a profusion of attacks on journalists and restrictions to their work and acts of censorship of contents and Internet blockages, noted at the weekend within the framework of coverage of the day of humanitarian aid on the Colombian-Venezuelan border.

IAPA President María Elvira Domínguez called for “respect and guarantees for the work of journalists” in Venezuela. Domínguez, editor of the Cali, Colombia, newspaper El País, declared that her organization “has learned of and received denunciations of the various risks to which national and foreign journalists have been exposed, as well as regarding the censorship by the regime and its instruments of repression to prevent Venezuelans from being informed.”

Ipys Venezuela (Instituto Prensa y Sociedad), SNTP (Sindicato Nacional de Trabajadores de la Prensa de Venezuela) and Apevex (Asociación de Periodistas Venezolanos en el Extranjero), among other Venezuelan organizations made a balance of the attack upon the press recorded on the border region on February 23, alerted the international community and called for guarantees of the right to information and freedom of expression.

The chairman of the IAPA’s Committee on Freedom of the Press and Information, Roberto Rock, vehemently condemned the attacks. Rock, editor of the Mexico City, Mexico, news portal La Silla Rota, stressed that “we are aware of the risks of working as journalists, however in the context of Venezuela, where the regime commits acts of violence against its own citizens, journalists and independent media see themselves exposed to greater dangers.”

Domínguez and Rock declared that the IAPA “maintains its commitment to continue working to denounce violations of freedom of expression and press freedom among other human rights so that Venezuelans may enjoy the essential freedoms that the regime denies them.”

The reports of acts against national and international journalists include harassment, intimidation, attacks, bullying, theft and destruction of journalistic material and equipment, attempts to murder and kidnap, as well as the censorship and blockade of digital channels and media in order to prevent the dissemination of coverage of the entry of humanitarian aid to Venezuela from the border with Colombia.

According to the SNTP at least 50 Venezuelan journalists remained trapped in Colombia after the unreasonable closure by the Maduro regime of the border between the two countries. For its part the balance by Ipys included 21 cases of violations of freedom of expression and digital rights.

Lenín Danieri, a Telocuentonews reporter, was injured in an arm and the face by pellets; Pascual Filardo, a photographer of La Prensa de Lara, was hit in his legs by a tear gas bomb, and a journalist of the RT Redfish channel was injured after being struck by an automobile driven by opposition activists.

Journalist Gregory Jaimes and cameraman David Guacarán of the online website Venezolanos Por la Información (VPI) were held by civilians for more than 30 minutes and they were robbed of their broadcast equipment, telephones and credit cards. Martyné Glod, a Venevisión journalist, and her cameraman were also robbed and attacked by armed civilians. Marcos Salgado, correspondent of the German video news agency Ruptly, was kidnapped and held incommunicado for some eight hours. Alonso Centeno, cameraman of TVenezuela and of VIVOplay, was threatened by armed people. Swedish journalist Annika H Rothstein was detained by paramilitaries, beaten and threatened with death, in addition to having her equipment stolen.

Taken off air were the channels 24 Horas and Televisión Nacional, Chile; Radio Caracol, Colombia; Antena 3, Spain, and NatGeo, United States; also the website of the Colombian Newspaper El Tiempo was blockaded. The Venezuelan Observatory of Social Divisiveness denounced an attack of denial of service against its server and there were reported intermittent blockages of YouTube, Google and Facebook which restricted the review of the contents on those platforms, as well as of other Internet pages.