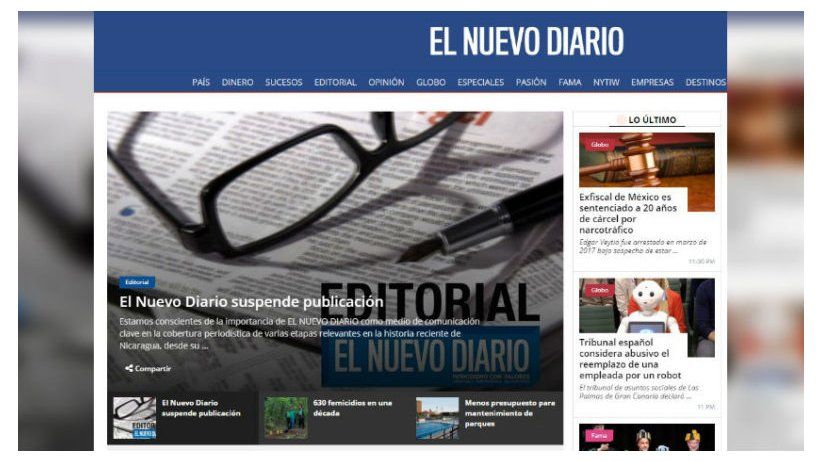 Downloads
0
0
Tweet
$.-
MIAMI, Florida (September 27, 2019)—At a time when the Inter American Press Association (IAPA) is preparing to start in Miami its General Assembly and celebrate its 75th anniversary it lamented that another newspaper in Latin America has announced the suspension of its publication due to pressure from an authoritarian government.

Nicaragua's newspaper El Nuevo Diario, founded in 1980, announced that as of today it will cease being published "due to the economic and technical circumstances and adverse logistics being faced." The print media in the Central American country have been denouncing since August 2018 the withholding of their supplies (paper, newsprint, plates, printing press spare parts, among others) on the part of the Customs Directorate General.

María Elvira Domínguez, IAPA president and editor of the Colombian newspaper El País, declared, "With the shutdown of publication of El Nuevo Diario a new voice is silenced, the product of the repressive policy of the Daniel Ortega regime to punish the press. It is a shame for Nicaragua and for the free world."

El Nuevo Diario had already taken steps to confront the shortage of its raw materials and since December it went from printing 38 pages to only eight on Monday to Friday. Also affected has been the Grupo Editorial La Prensa group which publishes the newspapers La Prensa and Hoy.

Roberto Rock, chairman of the IAPA's Committee on Freedom of the Press and Information and editor of the Mexican news portal La Silla Rota, added that "we representatives of media, journalists, news organizations and all those linked to the press industry must confront together the attack by authoritarian governments that spurn the free and independent press."

Domínguez and Rock in June were members of an IAPA mission that visited Nicaragua for the second time in less than a year. On that occasion, after welcoming the release from jail of journalists Miguel Mora, Lucía Pineda and Marlon Powell Sánchez, the IAPA deplored the rise in the climate of repression and harassment of the independent press and requested that Customs authorize the delivery of the supplies whose customs duties had been paid without delay by the news companies.

The IAPA officers reported in advance that at the organization's General Assembly in Miami, from Friday, October 4 to Monday October 7, there will be taken up in depth the problems that affect press freedom, such as violence against journalists, legislative bills and stigmatization, among other measures used by those in power and enemies of the press to attack the media.