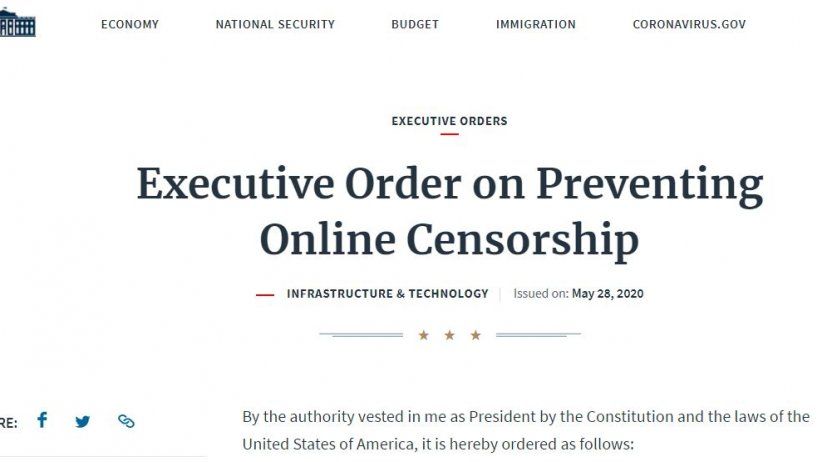 Is contrary to the "spirit of the deep debate on freedom of expression that must prevail in the digital sphere."

Miami (May 29, 2020).- The Inter American Press Association (IAPA) rejected as contrary to the "spirit of the deep debate on freedom of expression that must prevail in the digital sphere," an executive order signed by the President of the United States Donald Trump, which would hold internet platforms such as Twitter, Facebook, Google and YouTube, among others, responsible for the content distributed by users.

IAPA President Christopher Barnes considered that "the necessary debate on the responsibilities and duties of the platforms in terms of content distribution and curation cannot be framed by a presidential executive order that, obviously, has been dictated by President Trump angered by the treatment given by Twitter to some of his tweets."

"President Trump's attitude displayed is far from the spirit of the deep and profound debate necessary on freedom of expression in the digital sphere, which must guide by the rich jurisprudence that has been created in the United States regarding the First Amendment right, "said Barnes, director of The Gleaner Company (Media) Limited, Kingston, Jamaica.

The president of the Committee on Freedom of the Press and Information, Roberto Rock, director of La Silla Rota, Mexico City, Mexico, added that "the unilateral decision of the White House will not only have repercussions in the country, but could also spread dangerous regulatory behaviors that could create a 'new pandemic' of coercion against freedom of expression at the global level."

The "Executive Order on Preventing Online Censorship" was issued after Twitter attached warning labels to two tweets published by President Trump in which he said that the mail ballots process requested by some governors in order to circumvent the effects of the pandemic by Covid-19, could lead to electoral fraud. The Twitter warning tag, to Trump's 80 million followers, was accompanied by a link to a page that described the president's claims as "unsubstantiated."

The presidential decree has the purpose, among others, of eliminating the legal protections granted to technological platforms in Section 230 of the Communications Decency Act of 1996 that exempt them from legal responsibility for information published by third parties.

The executive order mandates a review of whether the policies of technology companies comply with their commitment to neutrality, after accusations that social networks discriminate information and opinions of users with a conservative bias. It also requires federal agencies to review their spending on official advertising on such internet platforms.

Barnes and Rock also referred to the IAPA Declaration of Salta of Principles on Freedom of Expression in the Digital Era.