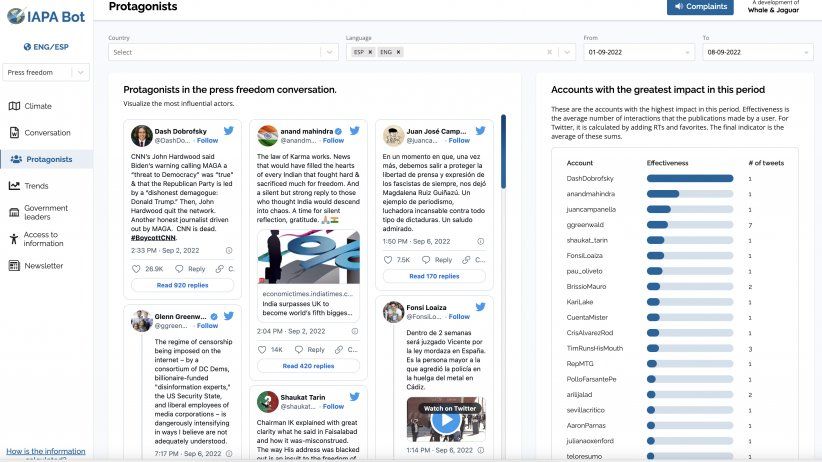 In Central America, it seems fashionable to denounce money laundering against journalists or media that are opponents or criticize governments.

Journalism in the Americas continued to mourn the murder of a journalist in Paraguay and another in Las Vegas, United States. There have now been 32 journalists murdered this year in Latin America. At the same time, attacks continued in Nicaragua, where a photographer had to leave the country due to government persecution. In addition, El Salvador's portal El Faro director was accused of economic crimes after denouncing secret negotiations between the government and gangs.

The "hate law" in Venezuela, sanctioned in November 2017, continues to worry and intimidate journalists and citizens. In Argentina, the government moved in Congress to pass similar legislation after the assassination attempt against Vice President Cristina Kirchner. Again, those close to official circles want to link independent journalism with the crime.

La Prensa de Nicaragua finally fell into the hands of Daniel Ortega's regime. However, its former manager, Juan Lorenzo Holmann, is still in prison, sentenced to nine years, and accused of money laundering. It is the same crime that José Rúben Zamora in Guatemala, former director of the newspaper elPeriodico, has been imprisoned for more than a month.

In Central America, it seems fashionable to denounce money laundering against journalists or media that are opponents or criticize governments.

Carlos Dada, director of the Salvadoran portal El Faro is also being accused of the same crime after the media outlet denounced secret negotiations between the government of Nayib Bukele and gangs.

The IAPA Bot tool allows knowing which accounts had the most interaction on Twitter; in this case, the most influential tweet generated 3127 interactions and was written by @BrissioMauro. The tweet's text is: "This account will dedicate itself to disprove fake news and to fight until the Anti-Fake News law is passed."