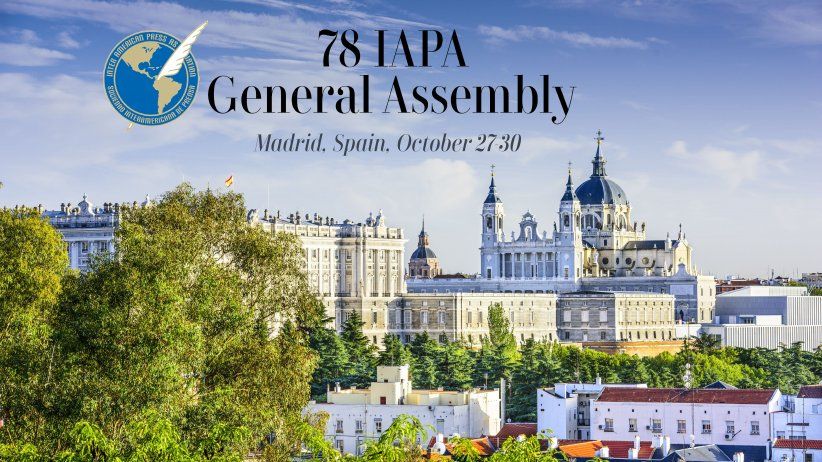 Miami (September 9, 2022) - The highest authority on the Spanish language, jurist and academic Santiago Muñoz Machado, will participate in the 78th IAPA General Assembly program in Madrid, along with leading editors from Europe and the Americas. Other speakers will address topics ranging from data journalism and new digital audiences to media sustainability and the debut in Spain of Google's Showcase program.

Muñoz Machado is the director of the Royal Spanish Academy and president of the Association of Spanish Language Academies. In May this year, the Spanish language suffered a decisive blow in Nicaragua, where Daniel Ortega's regime suppressed the Nicaraguan Academy of the Language.

The IAPA Assembly, one of the most anticipated events in the journalism industry in 2022, will be held from October 27 to 30 at the Hotel Meliá Castilla Madrid. Registration and hotel reservations can be made here.

Iberia Airlines is the official airline partner of IAPA. Therefore, delegates will receive a 10% discount on tickets from their place of origin to Madrid and issued on iberia.com, using the code: SIPMADRIDRID2022.

In the panels on the newspaper industry, Alejandro Lorenzo Edreida, CEO of Protecmedia, and David Sanchez of GFK, the official audience auditor in Spain, will coordinate a panel with representatives of Spanish and Latin American media groups under the title: "The challenges of journalism in the era of data."

Daniela Mendizabal, director of digital monetization of Grupo Milenio, Mexico, and Javier Martinez, director of digital subscriptions of Grupo Godó (La Vanguardia of Barcelona), will lead the panel "The battle for readers' attention in an environment of information overabundance," moderated by Xalok

As an appetizer to the Assembly, on October 26, the famed IE Business School of IE University in Madrid will offer delegates of the IAPA an academic program on digital transformation. The course will take place at the new IE Tower in Madrid, the world's tallest vertical university campus with 35 floors.

Other presentations include EFE news agency president Gabriela Cañas, who will lead the panel on journalism and the Spanish language, along with Santiago Muñoz. The New York Times Chairman and CEO, A.G. Sulzberger, will make a presentation along with IAPA Vice President Michael Greenspon, Global Head of Print Licensing and Innovation at The New York Times. Finally, the editor-in-chief of Spain's El País, Pepa Bueno, will speak about the global evolution of the leading Spanish-language daily, along with its executive editor, Borja Echevarría.

Agence France-Presse (AFP) President and CEO Fabrice Fries will speak on "Neighboring rights and a successful agreement with platforms on content." In addition, the Europa Press news agency will host a dinner honoring the IAPA Awards for Excellence in Journalism 2022 winners in 15 categories.

Other panels will address topics such as media sustainability with the participation of Unesco and the European associations of media editors. In addition, the program will include other discussions on the relationship between media and digital platforms, copyright, and payment for news content.

Protecmedia will host a reception and dinner for all participants at the Museo Nacional Centro de Arte Reina Sofía, Spain's national museum of 20th Century art. The EFE news agency will also host a dinner at the iconic Zarzuela Racetrack on the outskirts of Madrid. IAPA is also organizing with a local agency a program for accompanying persons with various sightseeing options in Madrid and other Spanish cities.