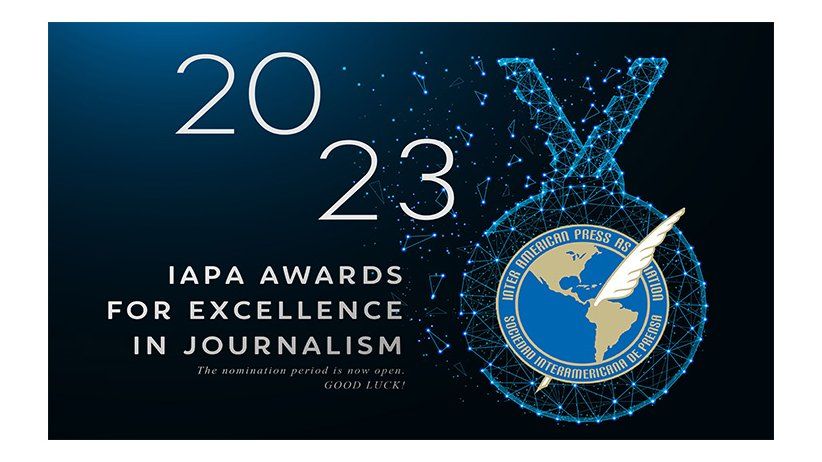 Applications must be submitted by July 1, 2023.

Review the rules and register your entry here.

Miami (December 7, 2022)- The Inter American Press Association (IAPA) has announced its Excellence in Journalism 2023 contest, aimed at media and communication professionals from North America, Latin America, the Caribbean, and Spain.

The chair of the IAPA Awards Committee, Leonor Mulero, Grupo Ferré Rangel Media, San Juan, Puerto Rico, said that "the contest has a central and permanent objective: to highlight the best in journalism so that it serves as a benchmark of quality."

In this edition," said Mulero, "we have adjusted the dates of presentation of the nominations, bringing them closer to the awards ceremony in October."

The contest is open to works published between July 1, 2022, and June 30, 2023, in print media, whether newspapers, weeklies or magazines, digital native media, and online publications of radio and television stations will be considered. Nominations must be received by July 1, 2023.

A jury of the IAPA Awards Committee will select the winner in each category. The first prize in each category is US$2,000. The awards ceremony will be held in Mexico City in October 2023 during the 79th IAPA General Assembly.

The IAPA will also award the Grand Prize for Press Freedom to an individual or organization with significant achievements in favor of this cause.

An informative webinar on the launch of the IAPA Awards for Excellence in Journalism 2023 will be broadcast on Thursday, December 8. Please register for this presentation here.

It is not necessary to be a member of IAPA to participate.

The 14 categories of the SIP Excelencia Periodística 2023 Awards are:

14. College Journalism (sponsored by the Latin American Council for the Accreditation of Journalism and Communication (CLAEP).

The IAPA thanks CNN en Español for its general sponsorship of the contest.

IAPA is a non-profit organization dedicated to defending and promoting freedom of the press and freedom of expression in the Americas. It comprises more than 1,300 publications in the Western Hemisphere and is headquartered in Miami, United States.