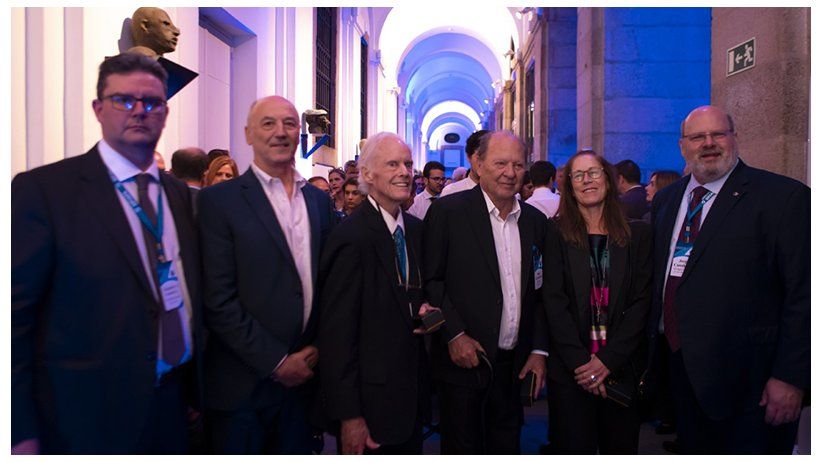 At the Reina Sofía Museum in Madrid, during the 78th IAPA General Assembly, Edward Seaton, along with Raúl Kraiselburd, of El Día de La Plata, Argentina, were honored by their colleagues for their 50 years of participation and as precursors of the IAPA's Latin American Council for the Accreditation of Education in Journalism and Communication (CLAEP). From left to right: Alejandro José Lorenzo Edreida, CEO of Protecmedia; IAPA Executive Director Ricardo Trotti; Edward Seaton and Raúl Kraiselburd; Úrsula Freundt-Thurne, Dean of the School of Communications at the Peruvian University of Applied Sciences (UPC) and Jorge Canahuati, former IAPA President.

Greenspon: "Edward was a living legend for editors and journalists committed to free speech."

Miami (December 28) - The Inter American Press Association (IAPA) today expressed "deep sorrow" at the death of its former president Edward Lee Seaton, who, for more than half a century, built bridges of friendship between the principal editors of the north and south of the continent.

Seaton, 79, died Tuesday of natural causes at his home in Manhattan, Kansas. He was chairman of the board of Seaton Publications, which owns several newspapers and radio stations. He also served as president of the American Society of Newspaper Editors and on the Pulitzer Prize Board of Directors.

"Edward was a living legend for editors and journalists committed to free speech. He was present in all our struggles and left us with a great example," said IAPA President Michael Greenspon, Global Director of Print Licensing and Innovation at The New York Times Company, United States.

Seaton presided over the IAPA from 1989 to 1990, but his contribution spanned several decades. He was one of the promoters of the 1994 Hemispheric Conference at Chapultepec Castle in Mexico City, which resulted in the Declaration of Chapultepec, a decalogue of Press Freedom. He also was part of the Cantigny Conference, Illinois, in 1999, which gave rise to the CLAEP project of the IAPA, which brings together 24 Schools of Journalism from Latin American universities. In 2001, he was one of Mexico's leading figures in the IAPA Forum on Freedom of Expression, promoting access to public information laws in Latin America.

At the end of October, during the 78th General Assembly of the IAPA held in Madrid, Spain, Seaton received special recognition for the 50th anniversary of its first assembly in 1972 in Chile. Since then, he has participated in numerous international missions throughout the countries of the hemisphere, always defending press freedom and freedom of expression wherever it was in danger. He participated in his last session with the organization's Executive Committee two weeks ago.

IAPA is a non-profit organization dedicated to defending and promoting press freedom and freedom of expression in the Americas. It comprises more than 1,300 publications in the Western Hemisphere and is headquartered in Miami, Florida, United States.