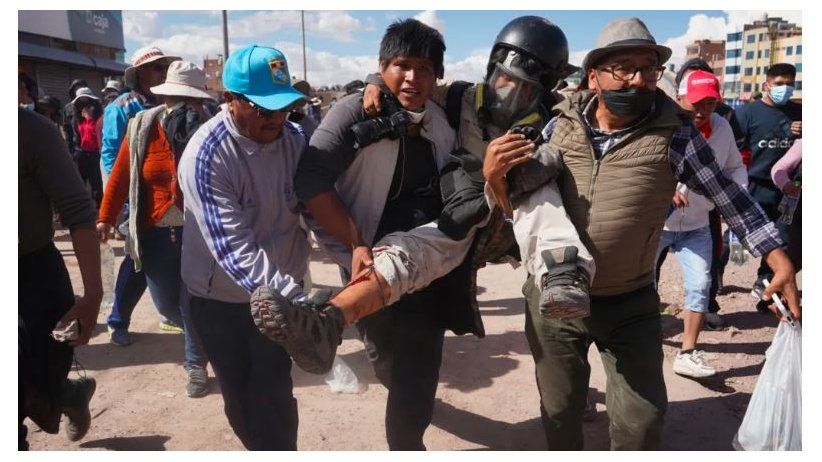 Threats against journalist in Ecuador

Miami (January 13, 2023) - The Inter American Press Association (IAPA) condemned the aggressions and obstruction of the work of the press in Peru. Furthermore, the organization warned about the risks journalists faced during the coverage of public demonstrations in other countries and called the media to "urgently activate their security protocols."

The National Association of Journalists (ANP in Spanish) of Peru registered more than 72 attacks against the press since December 7, following the protests that began after the dismissal of then-president Pedro Castillo. Among the recent events, on January 7, EFE agency photojournalist Aldair Mejía was shot in the leg while covering demonstrations in Juliaca, in the department of Puno. On January 5, journalists Luis Angulo and Pablo Torres of radio La Ribereña in Bellavista province were intentionally hit-and-run. In most cases, journalists have been denouncing the security forces as the source of the most violence against them.

The chairman of the IAPA's Committee on Freedom of the Press and Information, Carlos Jornet, expressed alarm "at the serious dangers being faced by Peruvian journalists, and their colleagues in Bolivia and Brazil, during the coverage of social protests due to attacks, threats, and theft of equipment."

Jornet, the editor of the newspaper La Voz del Interior of Córdoba, Argentina, urged the media to "urgently activate their security and protection protocols to prevent journalists from being exposed to risks during their work."

Threats against journalist in Ecuador

Jornet also condemned the threats against Andersson Boscán, editor of the Ecuadorian digital media La Posta, after publishing an investigation on January 10 on an alleged network of corruption in public companies involving Danilo Carrera, brother-in-law of Ecuadorian President Guillermo Lasso.

Boscán, a Venezuelan journalist, received intimidating messages from third parties saying, "Your journalist friend can't escape this one" and "Tell him that his head has a price on it." Subsequently, graffiti with the legend "Boscán, do you love narcos?" appeared in different parts of Quito and at the media outlet's headquarters. Because of the report, the National Assembly and the Attorney General's Office announced investigations into corruption.

Jornet asked the authorities to "investigate the threats and guarantee the journalist's safety."