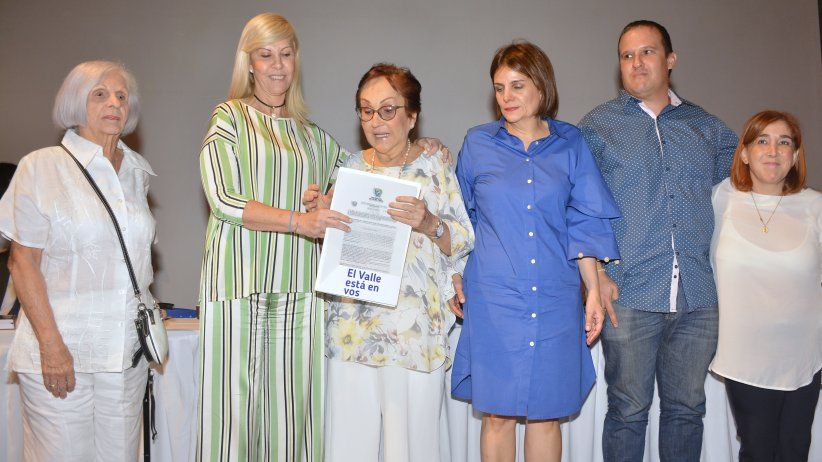 The Governor of Valle del Cauca, Dilian Francisca Toro (second from left) delivers an official document to Gerardo Bedoya's sister, Clara Bedoya Borrero. She is accompanied by Lía Bedoya Borrero, sister and other relatives of the murdered journalis

"We cannot say that justice was done": María Elvira Domínguez, IAPA president, about the murder of Gerardo Bedoya Borrero.

MIAMI, Florida (October 1st, 2019).- "Today is a day to get together to remember a brave journalist to whom they took away his life for searching for the truth and denouncing the bad things that then oppressed our society," said the president of the Inter American Press Association (IAPA), María Elvira Domínguez, in a ceremony held yesterday in Cali, Colombia, in which the Colombian government recognized its responsibility for the murder of Gerardo Bedoya Borrero 22 years ago.

Bedoya Borrero was murdered on March 21, 1997 in Cali. He was the editor of the op-ed section of the Cali newspaper El País. In 1999 the IAPA investigated his case, which it later submitted to the Inter-American Commission on Human Rights (IACHR). The reparation ceremony held at the La Tertulia Museum in Cali, Valle del Cauca, came about from an amicable agreement solution signed on August 16 between the IAPA and the Colombian government with the support of the IACHR.

In the Public Act of Recognition of Responsibility and Request for Pardon the journalist's sister, Clara Bedoya Borrero, thanked the IAPA "because this is the one that has moved during 22 years this process to achieve all that has been achieved. There have passed 22 years and we have not been able to know what happened, we do not understand why they killed Gerardo who, despite having a strong character, was a human being that did no harm to anyone, he behaved well, he was a friend of his friends ... he detested corruption, the mobsters and the guerrillas. We miss him very much all this time, we hope that in the end his death will not remain unpunished and it is learned who killed him."

On the part of the Colombian government there spoke the Presidential High Commissioner for Human Rights and International Affairs, Francisco Barbosa, who said that when Bedoya's murder occurred "not even the generation that today is governing was directly aware of all that was happening in Colombia. Today we, a later generation, a generation headed by President Iván Duque and by the officials that exist in this government, are recognizing what happened and we are urging all the authorities for us rapidly to proceed to the reparation and the compliance with the measures agreed to" by the IACHR.

Among other measures the amicable agreement solution includes scholarships for pre-graduate students of the Social Communication program at the Universidad del Valle university, the creation of the Gerardo Bedoya Borrero Honorary Award to be granted annually, financial compensation and support in health, as well as the designation of the journalist's name on the Jamundi-Robles-Timba highway in Valle del Cauca department, something that was made official yesterday through the presentation of a parchment to the family.

Valle del Cauca Governor Dilian Francisca Toro explained that "the designation of the Jamundi-Robles-Timba highway with the name of 'Gerardo Bedoya Borrero' is a recognition of his professional values and ethics, praising in this manner his personal virtues, patriotism and sacrifice that he held throughout his life."

The IAPA president and editor of the Cali, Colombia, newspaper El País, where Bedoya worked, thanked the Knight Foundation of the United States and the IAPA because during 20 years they have maintained "the persistence to seek out the truth, the objective that guides our body and journalism which give it reason to exist." Specially, she praised the role of the Bedoya family because "they allowed us to work on the case" and she expressed confidence that the government "will assume its responsibility and duty to continue the investigation" because "we cannot say that justice was done."

The head table of the ceremony was made up of Maurice Armitage Cadavid, mayor of Cali; Ana María Ordóñez, director of the International Juridical Force, the State Juridical National Defense Agency; Juan José Quintana, Human Rights Director of the Foreign Relations Ministry, and Roberto Pombo, editor of the Bogotá newspaper El Tiempo and chairman of the IAPA Chapultepec Committee. 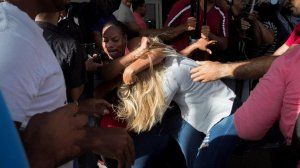