IAPA Bot: More mourning and uncertainty about journalism in the Americas 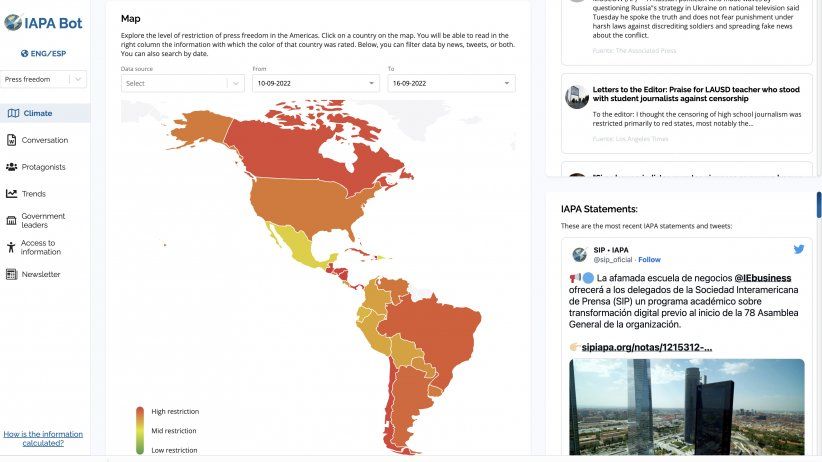 In the Climate section, at the beginning of the tool, there is a heat map of America with different colors according to the situation in each country.

The practice of journalism in the Western Hemisphere is becoming increasingly risky, according to the weekly summary of IAPA Bot, a digital monitor of the state of press freedom in the region. Two journalists murdered in Haiti and one in the city of Las Vegas, United States, added mourning and uncertainty to the profession.

In Paraguay, after the shooting death of journalist Humberto Coronel on September 7. In Uruguay, there are reports on the deterioration of press freedom.

IAPA Bot is an artificial intelligence tool for real-time Inter American Press Association monitoring. A colored map in the climate section reveals the press freedom situation in each country.

In Bolivia, journalists feel cornered by justice operators. They are forced to reveal their news sources under threat of legal action.

In Nicaragua, raids on media outlets, equipment confiscation, and journalists' arrests continue. Eleven media workers remain imprisoned, and 140 journalists had to go into exile to protect their lives.

This week's most influential tweet, -"Portrait of a Senile Fake News Spreader: Oil on canvas, September 2022", by @MuseoTuitero- generated 3,694 interactions. The most mentioned topics on Twitter were "freedom of expression" and "fake news."

IAPA Bot is an artificial intelligence tool of the Inter American Press Association that monitors press freedom violations in real time. It tracks information published in the media, Google News, Twitter, and a selection of stories and complaints. In addition, it contains a heat map that allows observing the press freedom climate in each country, a button to make complaints, and a menu highlighting government leaders' statements, citizens' conversations, and relevant events.