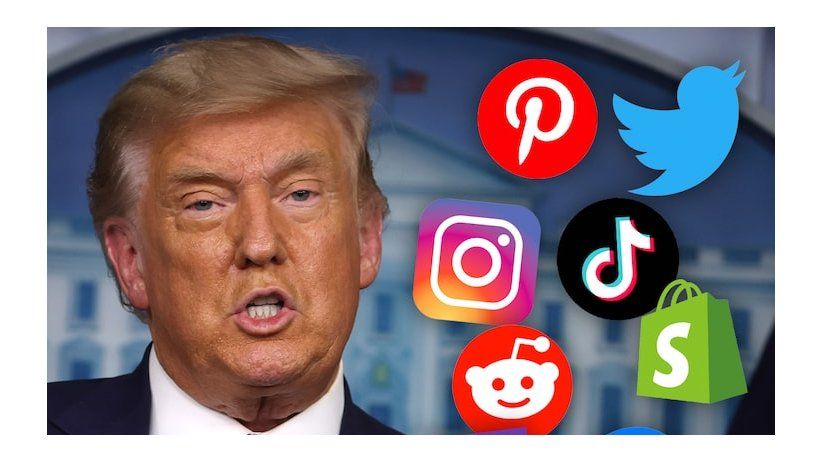 Miami (January 13, 2021).- After the personal accounts of the President of the United States, Donald Trump, were banned from various social media platforms, that blame him for " incitement of violence," the Inter American Press Association (IAPA) highlights its Declaration of Salta of Principles on Freedom of Expression in the Digital Era. The organization considers that this document is relevant in the discussion on the role and responsibility of internet platform operators in observance of free expression and for the analysis of this and other similar events that affect the daily lives of millions of users of social media.

The assault by supporters of President Trump on the United States Capitol on January 6 led to the blocking, in some cases permanently, of the president's personal accounts on Twitter, Facebook, Instagram, Snapchat, YouTube, Twitch and TikTok, as well as the removal of the conservative Parler app on Amazon and Apple and Google. These measures taken by private companies, justified by some and criticized by others, including world leaders, reveal new complexities about freedom of expression in the digital realm.

In this context, the president of the IAPA, Jorge Canahuati, considered that the principles of the Declaration of Salta, adopted by the IAPA in October 2018 in the city of Salta, Argentina, establish rights and duties of the actors who participate in the exchange of information in the digital environment, be it platforms, content creators, users and governments.

Canahuati, president of the multimedia OPSA Group of Honduras, states that the Declaration warns that, despite the positive impact of internet communication, attacks and threats have not stopped, from "excessive state regulations" to "malicious dissemination of information ", as well as the actions of private actors" who exercise substantive power in the circulation of information."

Beyond the self-regulatory justification of the platforms in view of Trump's responsibility in the acts of violence, Canahuati added that the greatest noise generated is due to whether a private platform, with characteristics of a public network due to its scope and massiveness, can decide on the topics of public debate or censor voices no matter how unreasonable they appear to be. "The indefinite blockade of the expressions of a public person, as in the case of Trump, implies prior restrain, as defined in point 5 of the Declaration of Salta, since crimes or misdemeanors are inferred that have not yet occurred," said Canahuati. "What is dangerous is that the correct application of the principle of subsequent liability is no longer considered."

Carlos Jornet, president of the IAPA's Committee on Freedom of the Press and Information, analyzed that part of the global confusion about the measures adopted is because the platforms have been erratic in applying criteria to similar situations that have occurred in different countries. He said that the Declaration of Salta is imperative before the platforms, saying, "policies and criteria used to restrict content circulation must be clear and transparent", so as not to incur into what is called "culture of cancellation." With the aggravation that, in doing so, they can be blocking the public debate.

Considering the pressure that the big US platforms could experience due to the imminent change of government in the country, Jornet, director of the newspaper La Voz del Interior, from Córdoba, Argentina, paraphrased article 13 of the Declaration of Salta, which asks technological intermediaries to "committed to respect and promote freedom of expression and must not yield pressures from governments and other powerful groups." If the argument is one of "incitement to violence" or "encouragement to insurrection", the platforms could have deleted the messages that they considered illegal or ordered a brief suspension of the account, while they urged a judicial ruling that ordered a more drastic measure, added.

Canahuati and Jornet expressed the IAPA's fear that the measures adopted by the platforms could lead to an unbridled legislative race to regulate freedom of expression in the digital area, aspects that the Declaration of Salta also establishes as one of the greatest threats.

This Thursday, at 12:00 hours in Miami (EST), the IAPA will offer an open discussion (in Spanish) on the subject on Zoom, with representatives of the organization and special guests.